Najwa S. Monday, December 21, 2015, December 21, 2015 EDT Last Updated 2015-12-22T01:09:06Z
Still remember about a group of mysterious crater in the Arctic tundra of Russia, Siberia, which originally appeared suddenly in mid-July 2014? If no one yet knows about this giant crater, reportedly all started in mid July 2014 when a mysterious hole in the permafrost is found by a helicopter pilot in the Yamal region, northern Russia. 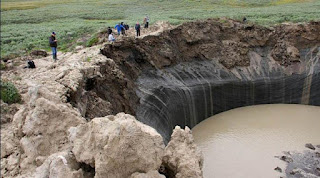 This gigantic crater of course directly into the center of world attention and worrying experts around the world. In fact, according to an alert Siberian Times, until February 2015, there is the emergence of new craters in Siberia.

See strange things like this, of course, many bizarre explanation that appears, too, from the fall of missiles, missile nyasarnya to an explanation of aliens from outer space. Many who accept the idea disturbing that it happened because of the explosion of methane gas associated with global warming, then formed a large crater giant. Methane is also a serious concern, is not it? 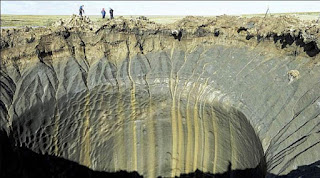 However, in mid-2015 and then, a new explanation appears on the mystery of the first giant crater commonly known scientists as this B1. Reported by Siberian Times, one of the giant hole has been quickly filled with water only in the last few months. Having measured using the tool found that the depth reaches more than 60 meters. The water is now only 10 meters from the edge of the hole, scientists berkekspektasi that the lake will be formed from the giant crater.

Reporting from EarthSky, Carolyn Ruppel, Head of the US Geological Survey's Gas Hydrates Project says that methane hydrates in permafrost settings are usually unstable above a depth of approximately 200 meters. Crater is much more shallow than that, so he said that linking with methane hydration may be said there. Ruppel and other scientists call a simple explanation, linked with mounds of ice that covers the earth in the Arctic and subarctic Urtara known as pingos. 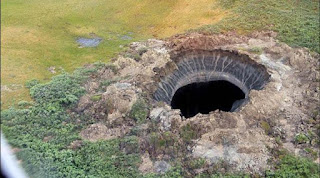 A huge hole created when pingos exploded after filled with gas at its core. According to Professor Vasily Bogoyavlensky, who led the most recent expedition this year, it is a very interesting process because now experts consider the formation of a giant crater that is anything that has never been observed before. 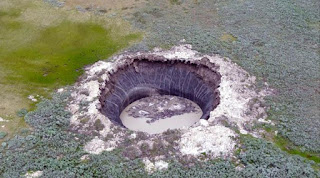 Ruppel told EarthSky that the stone may have been issued to the top when the methane containing natural gas, where the gas is stored in the permafrost continues to be under pressure with heavy pingos, suddenly released at a temperature warm and be fall the pingos. Then? Formed giant crater.