Green Bank, the City of the No Signal Mobile, Wi-Fi, Radio and Television -->

Green Bank, the City of the No Signal Mobile, Wi-Fi, Radio and Television

updetails.com Monday, January 25, 2016, January 25, 2016 EDT Last Updated 2016-01-26T04:31:56Z
Green Bank, in Pocahontas County in West Virginia, USA, is one of the quiet residential place on earth. Here there is absolutely no cell phone signal, no Wi-Fi signal, even here there is no radio and television waves that can be captured. 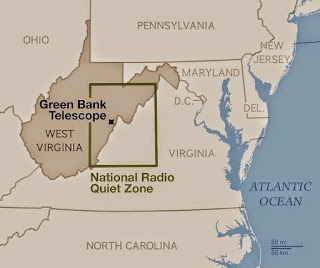 But Green Bank instead of lagging behind in technology. Instead, this area is home to one of the world's largest radio telescope named Robert C. Byrd Green Bank Telescope (GBT), operated by the National Radio Astronomy Observatory. GBT is the reason why this town electromagnetic silence from the crowd.

Radio telescope works by detecting the electromagnetic waves coming from distant galaxies. This signal is so faint that small emission of radio waves from electronic gadgets may interfere with the reading of the radio telescope. For this reason, all mobile phones, Wi-Fi, radio and other communication devices are prohibited here. There is no cell phone towers around this area, there is no music played on the radio or on television soap operas. Even gasoline-fueled cars are not allowed because gasoline engines use a spark to burn a mixture of fuel and air, and electrical sparks generate electromagnetic waves.

The boundaries of the free zone extends far beyond the Green Bank, an area roughly equal to 13,000 square miles. This region called the Zone of Silence National Radio (National Radio Quiet Zone), and is located around the sparsely populated rural cross-border West Virginia, Virginia, and Maryland. Almost all types of radio transmissions and certain electronic devices is prohibited here that the Green Bank Radio Telescope can work without interruption. Green Bank is a community that is closest to the Radio Telescope.

Free life in Green Bank technology may seem impossible for those who can not live without their cell phones, but for the 140 residents of the city, their life is full of happiness. Children are not glued to the glowing screen of their mobile device. They actually talk to each other, instead of SMS. People greet each other and leave their doors unlocked. If they need to talk to someone outside the city, they use a public phone. 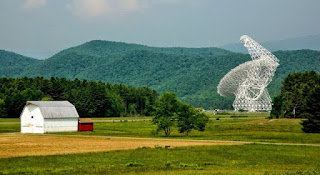 Living in the shadow of a giant telescope, some citizens are not even aware of the technological advances elsewhere.

"We did not realize that the whole world is increasingly connected and stay connected constantly, over the phone, internet and others," Caleb said Diller, who grew up in Pocahontas County, NPR. "In that case, compared with other regions, we like living in the past."
Over the past few years, many people came and stayed at Green Bank. These people claimed to suffer from electromagnetic hypersensitivity, or EHS (illness is not recognized by the scientific community). It is said that people who suffer from EHS get symptoms such as dizziness, nausea, rashes, irregular heartbeat, weakness and chest pain due to electromagnetic radiation. 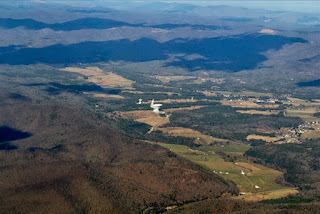 "Life here is not perfect," said Diane Schou, one immigrant "electrosensitive" first came to Green Bank with her husband in 2007. "There are no shops, no restaurants, no hospital nearby. But here, at least, I feel healthy. I can work. I'm not in bed with a headache all the time. " Source
ElectrosensitiveGreen BankInformationNational Radio Quiet ZoneNo Signal MobilePocahontas CountyRadio and TelevisionUniqueWi-FiZone of Silence National Radio
Comments