Her Daughter's Hard to Pregnant, Women's Granddaughter Gave Up Contain Yourself -->

Her Daughter's Hard to Pregnant, Women's Granddaughter Gave Up Contain Yourself

Najwa S. Monday, January 11, 2016, January 11, 2016 EDT Last Updated 2016-01-12T03:53:33Z
Texas - The last three years, Kelley and her husband Aaron MisKissach have tried various programs pregnancies but never succeeded. Even in this period, Kelley until experienced three miscarriages.
The mother, Tracey Thompson could only be miserable to see his daughter. As a mother, she wanted to do something. Until finally he was offered to be a surrogate mother for her daughter.

Tracey was initially hesitant because he had entered menopause. But the doctor assured that it is not impossible to do. They will use a special method to prepare the body Tracey in order to contain the fetus back.

After all three agreed, the doctors started the preparation procedures. Then the embryos left over from IVF or IVF Kelley used and implanted in the uterus Tracey.

Tracey (54) eventually gave birth to her first grandchild a few days ago at a hospital in Texas. Baby pairs and Aaron Kelley is female and weighs ideal, namely 3.03 kg.

Her granddaughter was named Kelcey, which is a combination of the name Tracey and Kelley. 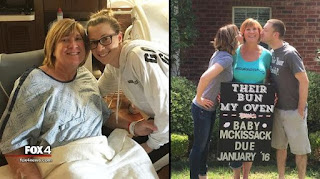 Mother successor could be anyone, a family alone or a stranger. However, in cases containing his own grandson grandmother like this, the surrogate mothers have to undergo a series of tests to ensure his physical condition ready, especially her womb, remember pregnant in old age can trigger fears of serious birth defects or other complications. (Lll / up)
Aaron MisKissachDoctorsKelceyMother Successorsolution for women who have childrenTracey and KelleyTracey Thompson
Comments