Cost of services reach 4000 dollars, or approximately IDR 55 million for each pig slaughtered feet. To Munchies (07/01), Sanchidrian tells the beginning of his career.

"At first I worked as a waiter. When a turn cut ham, I love it. Finally I learn and continue to improve the skills to pursue a profession that is beautiful." Sanchidrian said.

Her profession is not just to make money. "I also want to make sure Iberian ham typical Spanish well known. I travel around the world to educate people about the Iberian ham which became one of the Spanish gastronomic gems in addition to truffles, caviar and foie gras." 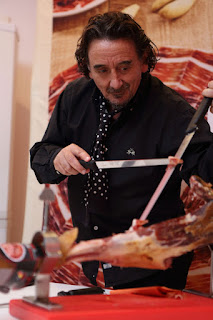 Then what kind of characteristic quality Jamon Jamon? "You have to know beyond a ham products. From the way their animals to the environment in the Iberian pig live," said Sanchidrian.

Before the ham cut up into sheets, be sure to check the product label because therein contained detailed information that needs to be known. Among the birthplace of pork, storage of meat, as well as humidity and air temperature. In addition, cutting the ham should be as little as possible to use ham joints in the sheet in order to taste more palatable.

Sanchidrian explain differences Italian prosciutto with Iberico Spanish. "The difference is huge. It can be seen from pigs that became the origin of both. Ham Iberian just come from Iberian pigs that are typical Spanish race of black pig. Pig is only reared in the Iberian Peninsula," said the man's thick eyebrows.

Iberian pig is also allowed to live freely in nature and eating grass or grain. The food is what gives the characteristic color, flavor, aroma, and texture of Iberian ham fat in the mouth.

While the Italian prosciutto comes from white pigs are not bred specifically. "They also do not live freely in nature," added Sanchidrian.

Compared to other ham from Spain as Jamones Serranos, Jamon Iberico different in some respects. Mainly from the type of pig used, the environment, and the salting process is longer than usual ham. The process takes 18-36 months. 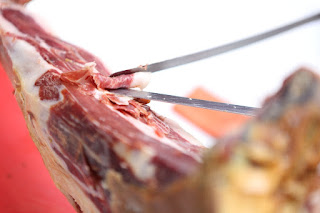 Sanchidrian recalled, as Ambassador of the World of Ham, He cut ham each year on 5 continents. He recommended the jamon very worth a try at least once in life. Such as Iberian ham in 2010 and the 2014 vintage is not currently on the market because it was marinated.

Not only delicious, jamon Spain is also good for health. "Jamon contains oleic acid that helps lower cholesterol and improve cardiovascular function. There is also a natural antioxidant content, protein, and vitamins and minerals that are important for the body," said Sanchidrian. (odi / adr)