updetails.com Sunday, January 24, 2016, January 24, 2016 EDT Last Updated 2016-01-25T01:29:49Z
Yogurt has been more popularly consumed by women. Whereas high protein yogurt is excellent for men. Hence comes the yogurt for men.
Yogurt with fruit pieces can be a nutritious breakfast for dieters. Yogurt consumption is now rising because the man is also aware of excess nutrients.

In fact, one study found that yogurt also can bring good effect for men. Among other things shiny hair, fertility increase, up to larger testes.

Danone became one of the producers who issued a special yogurt for men. Yogurt is named Oikos Triple Zero. Packed with black for a masculine impression.

Yogurt for men is claimed as a low-calorie snack that is good for men. Material staunch greek yogurt, Oikos Triple Zero contains 6 grams of fiber and 15 grams of protein, 25% of ordinary yogurt.

Although not contain sugar and artificial sweeteners, unique yogurt is available in 6 flavors. There Vanilla, Coconut Crème, Strawberry, Banana Crème, Mixed Berry and Peach. Even this so yogurt Yogurt official football and basketball athletes in the United States.

As quoted from metro.co.uk (21/1), Oikos Triple Zero has a sense of denser, creamier and more nutritious because of the higher amount of protein.

Besides Oikos of Danone, there is a special yogurt man who has been on sale since 2 years ago. Powerful named Yogurt, packaging is also dominated by black and contains 25 g of protein and amino acids. 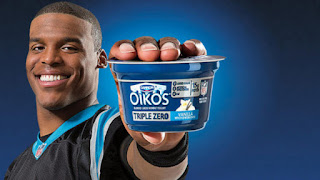 Both of these products are marketed in the United States. Most consumers are urban men who do healthy eating or dieting. (Odi / tan)
apple-cinnamonbananaBanana Crèmeblueberry-acaiCoconut CrèmeInformationmangoMixed Berrymore popularly consumed by womenPeachplainstrawberryTriple Zero Oikos yogurtVanilla
Comments