updetails.com Sunday, January 17, 2016, January 17, 2016 EDT Last Updated 2020-04-01T12:10:42Z
More than 10 years together, relationships Avenged Sevenfold and Warner Bros. is heating up. Music labels that have been overshadow A7X since in 2004 it was decided to sue the California rock band.
The cause is because Avenged Sevenfold tried to break their contract with Warner Bros. A7X utilizing the 7-year contract rules that apply in California to cut ties with the label.

7-year contract to the rules contained in the California Labor Code it is mentioned that one party can leave a personal services contract in certain circumstances after seven years.

After going through the lobby of the recording industry were conducted in 1980, this rule was changed to allow for the record company to claim lost profits from the album that have not been resolved by the artist.

Avenged Sevenfold signed a contract with Warner Bros. since 2004. In the contract, A7X asked to put out five albums, and until now only been realized four albums.

Through attorney Howard E. King, A7X mention that regime change had occurred which made a dramatic change in the company's turnover of Warner Bros. Until finally made the band agreed to break the contract with Warner Bros., the cornerstone of the 7-year rule.

But Warner Bros could not accept the actions of A7X and they decided to sue. For them, A7X has done a breach of contract and detrimental to the company because of the investment they provide to plan new album A7X is big enough. 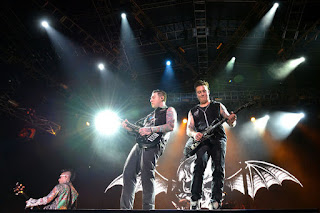 Reporting from Rollingstone, Avenged Sevenfold and Warner Bros. had tried to negotiate last fall. But they did not find an agreement and failed to sign a new contract.