Najwa S. Wednesday, January 13, 2016, January 13, 2016 EDT Last Updated 2016-01-14T02:49:08Z
Ankara - Prime Minister (PM) Turkey Ahmet Davutoglu ensure suicide bombing at Sultanahmet, Istanbul is a member of the group Islamic State of Iraq and Syria (ISIS). Actors enter the territory of Turkey from the Syrian border.
"We ensure that the perpetrators of the attack were foreigners who are members of Daesh," said Prime Minister Davutoglu in Ankara, referring to the Arabic name ISIS, as reported by AFP on Wednesday (01/13/2016).

Earlier, in a separate statement, President Recep Tayyip Erdogan said the suicide bomber came from Syria. But like Davutoglu, Erdogan did not mention the identity of the perpetrator more detail. Meanwhile, Deputy Prime Minister of Turkey Numan Kurtulmus only mention the 28-year-old actor.

While Dogan news agency reported, the suicide bombers were identified as Nabil Fadli, who was born in Saudi Arabia. Information was not yet certain truth. There has been no official statement from the Turkish authorities about the identity of the perpetrators details.

PM Davutoglu said the alleged perpetrators of the recent Syrian border crossing to enter the territory of Turkey. The name of the performer, continued Davutoglu, is not on the list of suspected militants in Turkey's supervision.

Suicide bomb blast that hit the tourist district of Sultanahmet, near Hagia Sophia complex, killing at least 10 people, mostly German citizen. While 15 others, including tourists from Germany and Norway were injured. 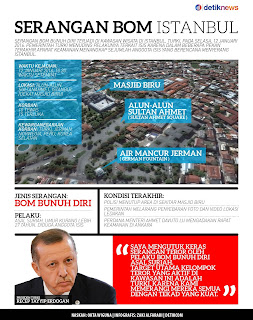 So far, no party or certain groups, including ISIS, which directly claimed responsibility for the suicide bombing. (NVC / ita)
A Separate StatementBomb Rocked Central Istanbul TourismNewsPrime Minister Davutoglu in AnkaraRecep Tayyip Erdoganthe perpetrators of the attack were foreigners
Comments