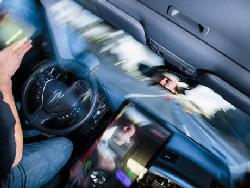 Reported by Bloomberg Business, Monday (12/28/2015), George uses the car for the 2016 Acura ILX autonomous car manufacturing process design. It also uses laser-based system or a radar (lidar) on the roof. The camera is also placed on the front to capture images of objects that are all around the car.
Go to the autonomous car parts made in George, there is a screen size of 21.5 inch Dell computer using the Linux operating system Ubuntu. The screen also displays an image obtained from the camera and lidar systems.

It also adds a joystick on the control lever which serves to move the autonomous system in the car. The dashboard dismantled George and looks like a series of components inside the computer. Automobile parts associated with the Linux operating system that has made George's autonomous car technology.
George Hotz artificial autonomous car designed to freeway, not to traffic jams are commonly encountered in urban areas. But George had tested the car in the San Francisco Area.

George worked on autonomous Acura hers alone. He was known as a champion hacker or hackers. Previously he had paved the i-Phone in 2007 and PlayStation 3. The intelligence also deliver George had menyicipi internships at well-known companies such as Google, SpaceX, and Facebook.
George's work and expertise in software development to deliver a meeting with the boss Tesla, Elon Musk. Tesla was reportedly working on an autonomous car that makes both of them run exciting meeting.

Even Elon Musk invites George to join Tesla in producing autonomous car. "Honestly, I think you have to work at Tesla," wrote Elon Musk to George via email.
But Elon Musk offers such resistance from George. He replied, "I appreciate the offer given. But I am not looking for a job."
Bloomberg BusinessGeorge HotzTechnologyThe 2016 Acura ILXThe Boss of TeslaUS hackers Autonomous Mobile Make It Alone
Comments