Najwa S. Monday, February 1, 2016, February 01, 2016 EDT Last Updated 2016-02-02T04:51:48Z
Students Institute of Technology 10 (ITS), Bachtiar Dumais Laksana (23) apparently did not want to stay silent if Indonesia was lagging behind in the field of technology, particularly defense and security. For that reason also, along Adhitya Whisnu Primary and Muhammad Iqbal made a mini tactical unmanned vehicle first.
Tank robot is controlled via a remote control is designed, assembled and produced by three. These products have not been manufactured, still a prototype. These tanks are named War-V1.

To support its activities, they founded his own company, named BDL-Tech. The product has been ogled by the Military Command Military Command VI / Mulawarman in London, as well as Cavalry Battalion 8th Infantry Division 2 KOSTRAD in Bandung. 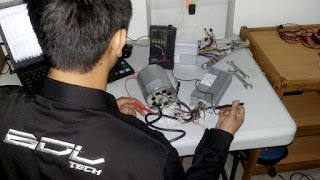 "My own directors, three of them, the work already take more than a year, approximately 13 months. Complete with design, mechanical design and control electronic. We did happen from the beginning willing to arrange company engaged in the field of defense and education," revealed Bachtiar moment talking with updetails.com, Monday (1/2) yesterday.

Making the robot tank that started from a hobby three in the military, with a background in electrical engineering graduate from the vocational school, they start trying to realize his dream. Design and model of artificial tank is derived from robot used by the Japanese military.

"Then we try, the count reckless. I was asked to Battalion Cavalry until the military command, which gave a positive response Mulawarman Military Command and Battalion Cavalry 8. So then with the existing concept, I myself wanted the vehicle to function as a back-up, in the field as a sweeper or a sweeper, after entering capable infantry backed up this unit. Hence, ranging from weapons systems we adjust to the purpose of the application, "he explained. 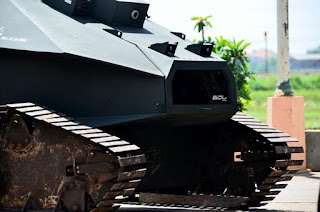 In the manufacturing process, Bachtiar and two colleagues have not received funding from any party, including the government. As a result of the purchase of components and other support tools are still using private capital.

"It's still private capital, I still join the parents, have not graduated from college. This includes the establishment of a CV and all sorts," he continued.

Because they use their own funds, they had difficulty installing the components more adequate. Therefore, all the necessary components to be imported from China for tens of millions of rupiah, it also does not include import duties.

"We are all in the field of electrical engineering disciplines of mechanical moving, we learn self-taught, so the design time to learn from scratch. So there is still a hand drawing from 2014," he recalled.

Even so, bachtiar already revealed there are some who want to sponsor a homemade tank. This tank will also be equipped to complete the thesis.

"It there was some part of my thesis Include the title, if the plan passes Kemenhan no disbursement of funds, from the defense minister may drop in to Higher Education," he concluded. [Tyo]
10ArmyBachtiar Dumais LaksanaCommand Military CommandITSMilitaryStudents Institute of TechnologyTank Robot War-V1 BDL-TechTechnology
Comments