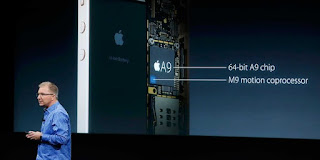 In the event Apple held overnight US time, Apple is in no rush to release a new smartphone and a tablet of their output, but they begin by discussing the issues. Starting from the Apple case with the FBI, energy utilization, as well as the development of the health platform.

But when it went to the session launching the latest devices, namely the iPhone SE and update iOS 9.3, Apple slightly offensive competitors. Apple through his vice president, Greg Joswiak, noting that 80 percent of users of iOS-based devices have been switched to iOS 9. This is in stark contrast to only 2 percent of Android users are already using Android Marshmallow the most recent.

After a bit offensive Android, it still continues when the iPad Pro was released by the head of marketing Phil Schiller. Apple itself seems there is a desire to deflect consumer Windows to Apple, where the iPad Pro offers more devices to support productivity and multitasking.

Schiller himself also underscored Intel and Microsoft's statement which said that 600 million PCs around the world have not been updated for five years.

"It's really sad," said Schiller responded to the statement.

After commenting directed to competitors, Schiller went on the show to talk about iPad apps now totaling 1 million more in the App Store. In addition, he talked about the best features of the 9.7-inch iPad Pro.
AndroidApp StoreAppleFBIInteliOSiPadiPhoneMarshmallowMicrosoftNewsStatementTeasedTechnologyWindows
Comments