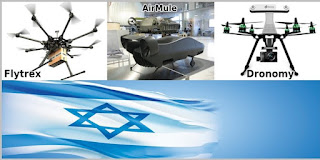 President Jokowi at the summit of the Organization of Islamic Cooperation (OIC) some time ago has decided to boycott Israeli products. Well, indirectly, this boycott eliminate the chances of Indonesia tasting sophistication Israeli military drones.

Rarely known indeed, but Israel is a military drone largest exporter in the world. Israeli drones have mostly designed for lifting heavy loads, and many are assigned to transport soldiers on the battlefield.

One of the most famous Israeli military drone was AirMule. Drone is able to fly up to speeds of 160 kilometers per hour and carry a maximum load of 635 kilograms. In total, 61 per cent of world exports of military drones supplied by Israel.

Start-up developer Israeli drone continues to innovate to expand in the world's unmanned aircraft, not only in the military sector. The proof is the drone 'Flytrex' and 'Dronomy'.

Flytrex developed by a start-up founded by Yariv Bash, co-founder of SpaceIL - Israeli company which aims to launch a space ship to the moon. Furthermore, Flytrex is the delivery drones that will be in charge of delivering packages to homes. Reportedly, these drones are already booked by large corporations kinds of UPS, Fedex and DHL.

Then there is the work of Israeli drone else can see, namely Dronomy. The drone made by Ori Afek and Guy Raz, former Israel Defense Department scientists. Dronomy is probably the world's first drone that flies 'eyes', allowed him to see and avoid obstacles in front of him automatically without the need for manually controlled.

Obviously, if the drones have made new Israel completed its development process, Israel has the potential to become world's largest manufacturer of drones.