It turned out that the Earth is elliptical, not round! -->

It turned out that the Earth is elliptical, not round! 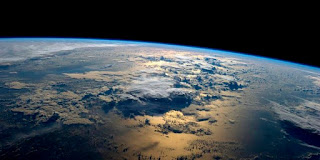 Many people assume that the Earth is round. This was reinforced by various phenomena and scientific theories.

But did you know that in fact the Earth is elliptical? Is it true? How can?

Actually, if there are people who say that the earth was round was true. It's just that it is a state in ancient times. But centuries ago, scientists and explorers began to realize that the earth is not perfectly spherical.

According to Geo Hunter British scientists led by Isaac Newton theorized that the centrifugal force of the Earth's rotation would 'force' our planet is to 'spread'. That is, the format has been changed from east to west as it spins on its axis.

The statement was supported by a French scientist who discovered strong evidence of changes in the earth's shape from round to elliptical. In 1753, French scientist expedition took measurements in the equatorial region in Peru and in the Arctic Circle in Lapland. From there the result of the earth at the equator is inflated so that further strengthens the theory that Earth is currently elliptical.

Not only that, the study of satellite Expertiment Gravity Recover and Climate (GRACE) NASA and the German Space Agency, noted that the expansion equatorial regions caused by the melting of the ice in Greendland and Antarctica.

Since the beginning, the state of the planet Earth is not perfectly round due to the rotation. So it makes the water on the earth's surface more gathered in the equatorial region than in the polar regions.

In the mid-1990s, the earth is expressed growing fat in the middle. That means that the earth is getting ellipse. As the ball is pressed from top to bottom (flattened). Curved waist grow in size and scientists have not been able to confirm the cause.

So, what is the effect if the earth is in the form of an ellipse?

According to computer simulations and analyzes performed by Scott Tremaine of the Institute for advandced Study in Princeton, New Jersey and Tomer Yavetz from Princeton University, this state will rescue the earth from satellites fall.

Apabiila earth has a perfectly round shape, many of the satellite will fall to atsmosfer and burned in a matter of months or years.


"Very interesting if you see there are many things that can interfere with the stabilization of low-Earth orbit, but there is a combination of many things which we can have good conditions for satellites," said Gregory Laughlin, a physicist at the University of California Santa Cruz.