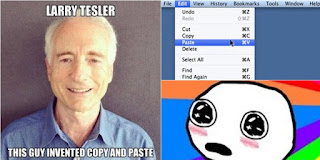 Undoubtedly, one of the most important features in the latest gadgets, from laptops to smartphones is the "copy-paste" or commonly abbreviated as "copy and paste". Without this feature, perhaps we would be confused by the multitude of jobs because of having to rewrite a wide range of important texts on the device.

Well, seeing how important Copas features fitting to thank Larry Tesler. He is the creator of the figure features 'million people' it.

Who is that Tesler? For the layman would be very strange to hear that name, but Tesler was very influential in the world of technology. Tesler initially is a computer scientist who worked at Xerox PARC in the 1970s. Xerox PARC is a computer research center in Paolo Alto, California.

At that time, Tesler was doing research program Smalltalk-76 is in charge of storing the text data into the internal memory of the computer. Well, when it was Tesler create features 'cut', 'copy' and 'paste'.

This feature is intended to cut the text to be moved to another part. Copas tercapat first used during the years 1973-1976 by Tesler and his partner, Tim Nott for Gypsy programming language.

After successfully creating a copy and paste feature, Tesler finally moved to Apple Computer in 1980. Here, he became head of the division of the development of computer technology, to participate in making applications Mac computer. In 1997, Tesler finally leave from Apple.

This man then continued his quest to Amazon to Yahoo. In both the giant company, Tesler equally served as vice president. Post-out of the two companies, Tesler now a contractor independent technology while spreading enthusiasm 'coding' to a generation of American youth.
AmazonAmerican YouthCodingcopy and pasteEnthusiasmFeatureGypsyLarry TeslerProgramming LanguageSmalltalk-76TechnologyTim NottYahoo
Comments