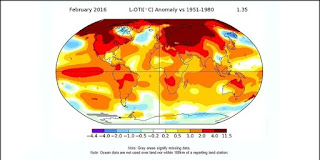 Global warming issue that often appears in the media, it was not a figment. In February, it broke the record hottest temperature of the Earth.

This situation occurs only broke the record in the previous month. In January 2016, the average temperature was 1.13 degrees Celsius higher than average temperatures, according to data provided by the Goddard Institute for Space Studies of NASA.

Report from NASA this is a report that is very important for the continuity of the climate on Earth. The analysts of the Weather Underground, Jeff Masters and Bob Henson even stated that the report is surprisingly similar to a bomb.

The analyst also said that the 'Arctic warming' is the main cause of this happening.

"As indicated by the dark red of the report, most of Alaska, Canada, eastern Europe, Russia, and the Arctic Ocean, is at a temperature of 4.0 degrees Celsius higher than average," said Masters and Henson.

NASA was also agrees that the Arctic sea ice is actually the sea, has recorded an increase satellite's surface, and its ice growth is very slow.

In February, the ice rise an average of only 14.22 million square kilometers. This is the lowest level in February along with satellite ever recorded. This lesser extent of 1.16 million square kilometers below the monthly average of 1981 to 2010.
Alaskaand the Arctic OceanArctic WarmingCanadaEastern EuropeFebruaryInstitute for Space StudiesNASANewsrecord hottest temperature of the EarthRussia
Comments