Terrible! This causes disappearance of ships and planes in the Bermuda triangle -->

Terrible! This causes disappearance of ships and planes in the Bermuda triangle 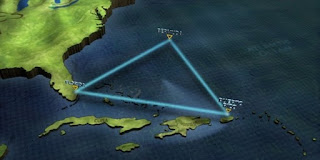 Mystery why so many ships and planes that disappeared in the Bermuda Triangle area, is still a mystery. However, a discovery in Scandinavia sea, may explain the mystery behind the death area.

Reported by the Daily Mail (13/3), scientists have discovered a basin of craters which has an area of ​​almost one kilometer, and has a depth of 150 meters, at the bottom of the Barents Sea, Norway. This basin is believed to arise from the accumulation of methane gas in Norwegian coastal waters, which are known for having a high content of natural gas. 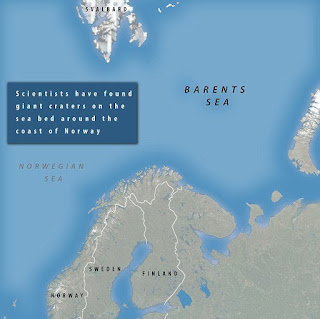 The Barents Sea is a lot of methane gas content dailymail.co.uk

It is estimated, methane gas leaking from the deposition of natural gas are located on the seabed. The leak eventually led to the emergence of 'cavity' capable of spraying gas.

Researchers from the Arctic University of Norway even stated that the amount of the basin is not only one. There are several similar basins and belching methane in large numbers anyway.

According to them, bursts on a large scale capable of so this explosion, can endanger a ship that may pass right over it. And the discovery of this phenomenon, eventually attributed to the loss of ships and aircraft in thousands of kilometers away, the Bermuda Triangle in the Atlantic Ocean.

Mysterious area that lies between Bermuda, Florida and Puerto Rico, it is believed also casualties due to bursts of methane from the seabed. A Russian scientist named Igor Yeltsov, able to explain it.

"The seabed in the Bermuda triangle, is actively decomposed due to their methane gas. Decomposition of this happening on a large scale like a landslide that occurred because the nuclear reaction. From there, the production of large gas gushed upward," said Igor Yeltsov. "This causes the sea temperature suddenly heated up, and the ship sank in seawater are mixed in such large gas content," he added.

It is estimated, sea water already contains large amounts of methane, will be bubbly and lose the ability to float a ship. This can even sank suddenly, without any warning at all. While never found the ruins of the ship, caused by diffusion scattered debris due to the gulf stream. It is quite appalling considering the incident there was always missing without a trace.

This is the most logical of various reasons why ships and planes could be lost if it passed over the Bermuda Triangle. Previously, various factors such as magnetic anomaly, terrible weather, human error, even alien, so the scapegoat for incidents related to the Bermuda triangle.
AlienBermuda triangleFloridaGasHigh ContentHuman Errormagnetic anomalymethaneMysteryNaturalNorwegian coastal watersPuerto RicoTerrible Weather
Comments