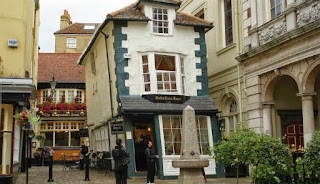 Design houses today many are somewhat eccentric, and unusual. As houses are built upside down. Mempuyai home interior or above, such as the chairs are placed on the roof which makes it unique and to attract visitors.

But one of the houses that stood in the market square in Windsor, in England, is unique. The house is bent or tilted. But this house is not the result of design nyelenah, but indeed the original shape like that.

The house named The Crooked House of Windsor, was built in 1592 at the edge of town market square and was originally called the Market Cross House. In 1687, the city council ordered the house was demolished to make way for neighbors, Guildhall, and then demolished the original building. 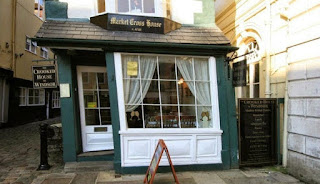 But the land dispute does not end, even more widespread, until won by the original owners. And the city council finally ordered by the court to re-establish residence in their original place.

And the house was rebuilt in haste, and without treatment, using green oak. But when the wood is dry, the house looks "weak" to stand on the ground. Since then, Market Cross House known as Crooked House of Windsor. 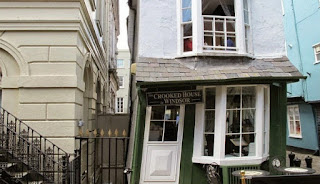 The house was originally a butcher's shop, but over the centuries it has been used for many types of businesses, including jewelry, breweries, antique shops, and a souvenir shop in the past. Currently, serves as a tea room and restaurant, which serves customers with a handmade pie, a delicious breakfast, lunch and dinner.