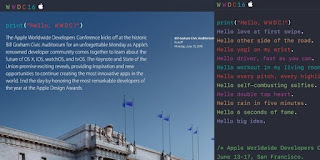 Before the launch of the iPhone 7 at the end of this year, Apple's first conference Worldwide Developers Conference (WWDC) on 13-17 June at the Moscone West building and Bill Graham Civic Auditorium, San Francisco, USA.

Apple announces WWDC 2016 with a colorful phrase shaped sketchy code that could potentially be a major topic WWDC this time. Primarily, WWDC 2016 will discuss the future of OS X, iOS, watchOS, and tvOS.

iOS 10 would become the most awaited by fans of gadgets, especially Apple fanboy. Possible announcement of iOS 10 will be held on 13 April. As for the launch of iOS 10 official may be done simultaneously with the introduction of the iPhone 7.

Apple also plans to show off their latest innovations in technology. A total of 100 sessions are scheduled by Apple, all the sessions led by the best engineers from the Cupertino company.
AppleCupertino Companyintroduction of the iPhone 7iOSiOS 10iPhone 7Moscone West BuildingNewsOS XTechnologytvOSwatchOSWorldwide Developers ConferenceWWDCWWDC 2016
Comments