BlackBerry turned out for a long time like 'spied upon' Government -->

BlackBerry turned out for a long time like 'spied upon' Government 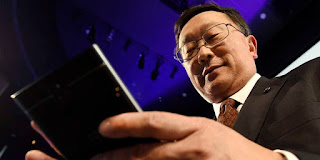 While Apple is so insistent do not want to serve the FBI request for help hacking the iPhone even though it belonged to a terrorist iPhone, BlackBerry do just the opposite.

Based on the contents of the blog Inside BlackBerry, BlackBerry CEO John Chen said that if his company had 'cooperated' with the Canadian government since 2010. Beginning six years ago, BlackBerry provides the decryption key security system communications device on the Police Canada.

Furthermore, as reported by Phone Arena (19/04), thanks to the decryption key Canadian police have tapped and unlock the security of more than 1 million BlackBerry messages. This action was done in an investigation of homicides that occurred in 2010-2012.

Thanks to the cooperation of BlackBerry, the Canadian Police called successful imprison seven people accused of the murder of one member of the mafia in Montreal, Canada.

"For BlackBerry, this is a balance between doing the right thing, such as the arrest of the perpetrators keriminal, and prevent government violate the privacy of its citizens, for example, when we refuse to give Pakistan access to our servers," said John Chen.

Chen also added if the decryption key is only granted to unlock a BlackBerry message, while for the security server security system of the BlackBerry BES maintained. BlackBerry BES called impenetrable because it does not have a 'back door' at all.