Humans eventually won against the super intelligent computer from Google -->

Humans eventually won against the super intelligent computer from Google 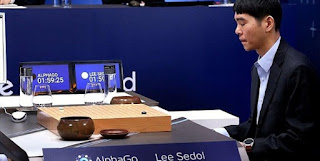 Having previously won three straight against Chinese chess grandmaster 'Go', super-intelligent computers owned by Google "DeepMind" with the program "AlphaGo" eventually lost. This is the first human victory against AlphaGo.

"The victory is very valuable and I would not exchange it for anything," said Sedol.

Previously, Sedol was quite frustrating at the beginning of the three games against AlphaGo as one of the best Go player in the world did not find any weaknesses in AlphaGo. But last Sunday, Sedol gets 'enlightenment'.

Sedol said as he made a new step the unexpected, AlphaGo responded as 'bug' or a system error. That is, AlphaGo not good enough to deal with the shock, the natural thing is done by humans.

Additionally, AlphaGo recognized Sedol experienced many difficulties in the game when running black stone. Again, this is evidence if the game of Go was not easily defeated by the robot, while emphasizing the need human intuition to win this game.

Last games between Sedol versus AlphaGo will take place next Tuesday. Although already missed a US$ 1 million if defeated AlphaGo 3 times, Sedol has proved humans has not been lost on the computer.