Translucent tunnel into Israel, the evidence of resistance Hamas never goes out

Translucent tunnel into Israel, the evidence of resistance Hamas never goes out 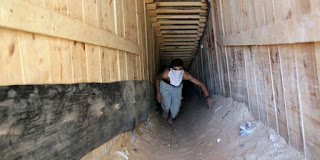 Israeli Prime Minister Benjamin Netanyahu two days ago praised the military successes of the Star of David to detect underground tunnel that runs from Gaza into Israeli territory.

According to Netanyahu's ability to find such a tunnel is the first breakthrough technology in the world.

"These days, the state of Israel was able to make a global breakthrough in the discovery of the tunnel," he said, as reported by the Times of Israel, Monday (18/4). "This technology is not available anywhere else. We've checked it out into the world."

The Israeli army found the tunnel extends from southern Gaza to penetrate into Pólit Kibbutz in Israel two days ago. It was the first underground tunnels were known to penetrate Hamas until Israel since the Gaza War in 2004.

Palestinian Zamn site reported that the tunnel was built for more than two years, including the power infrastructure in it.

Artificial tunnel Hamas had been used to smuggle food and weapons, including stretching from Egyptian territory.

Although the tunnel is already known to the Israeli military, Hamas does not seem to be affected.

"What the enemy found only a drop of the ocean struggle to defend the people, liberating the holy sites, the prisoners and the country," the statement said Qassam Brigades, the military wing of Hamas shortly after the Israeli military announced it had destroyed a tunnel.

Qassam Brigades released a video last night with threats against Israel. The rockets will be fired into the big cities of the Star of David, if teased tunnel Gaza Strip.

The main target of Hamas rocket attacks is the capital city of Tel Aviv and Haifa. The threat was uploaded to Youtube a few hours after the Israeli military said it had been 'neutralized' tunnel into Gaza used to smuggle food and weapons.

The attack was not clear when it was called the M-302 rockets that could reach targets more than 100 kilometers. Qassam Brigades weapon they dub it as 'Rocket Rantisi' to commemorate Abdul Aziz Ali Abdul Majid al-Rantisi, Hamas religious leader, who was killed in 2004 because of Israeli fighter jets attack.

Hamas has even accused the discovery of the tunnel is the transfer of the issue of the failure of the Israeli government take care of its citizens.

"After a series of criticisms of the military and political leaders as well as attacks on citizens living near Gaza, the enemy announced the discovery of a tunnel to the east of Rafah, but they dare not publish in detail about it to the people," said Hamas' military wing.

"Qassam Brigades save all the facts that have been hidden Zionist enemy."

It is not clear what is meant by the statement by Hamas. However, the Palestinian media, the site of Fatah, said the discovery of the tunnel by Israel is not thanks to their technological capabilities, but because of one man: Egyptian Mahmud Awad Itauna.

Itauna, 29 years old, is a member of Hamas in charge of operating the tunnel until he was arrested by the Israeli army a few weeks ago.

Fatah said Itauna, Itauna alias Sammy, stay in Jabalia in the northern Gaza Strip. He was arrested by Hamas police several months ago and was stripped of his duties in the tunnel project. But finally he again served as manager of the tunnel in northern Gaza.

Local residents reported her missing a few weeks ago and Hamas later announced he was taken to the border into Israel.
Benjamin NetanyahuConflictGazaHamasIsraelIsraeli GovernmentMiliterNewsPalestineWar
Comments