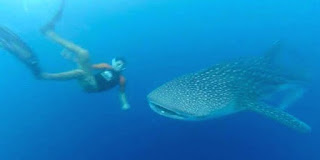 Some rules apply to visitors to protect the existence of marine mammals with the Latin name Rhincodon typus this. Among these is the prohibition of direct touch and take pictures with the camera luminous.

"Can snorkeling at the site but can not be touched directly. It is forbidden for visitors," said Stilly Loho, a visitor from Manado to merdeka.com, Monday (18/4).

He claimed was glad to have the opportunity to met with these plankton-eating marine animals. Together with several other colleagues, Stilly spent 15 minutes each day to mingle with the whale sharks.

Snorkeling activities are very rare in the waters of the Village Botubarani exploited for 4 days while capture precious moments. Sharks giant with leopard motif section he was very docile and not aggressive with the presence of boats and humans. Occasional marine animals visitors approached the boat and came to the surface. Only visitors are prohibited from conducting activities that can stimulate aggressiveness sharks.

"There are about 8 sharks whale with a length of about 5 to 9 meters. Its weight is estimated at 20 tons, but they are very docile," he continued.

Stilly added, the appearance of the fish is thought to be caused sewage heads and shells by the sea product processing plant PT. Sinar Ponula Deheto. Every day, the rest of processed shrimp waste dumped into the sea about 30 meters directly behind the plant.

"There is a seafood processing plant near the site. The information, any waste dumped shrimp is always engulfed in fish. The possibility that attract whale sharks to feed on shrimp," said Stilly.

The emergence of the whale sharks since last week to the attention of citizens. Not only local residents, visitors from outside the area was coming to a close look at marine animals that live only in deep water it. This rare sight spread to foreign countries. Foreign tourists were coming to watch anomalous behavior of whale sharks in the ocean Gorontalo.
Foreign Countriesforeign touristsGorontaloInfoTourist AttractionTravelVillage BotubaraniVisit IndonesiaWhale Sharks
Comments