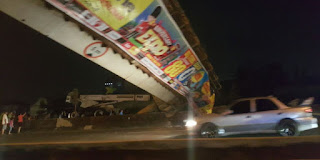 A trailer truck carrying heavy equipment hit the bridge crossing People at Kilometer 7 JORR leads to BSD, Sunday (15/5) night. Until the middle of the night, the evacuation process is still underway.

"Yes evacuation is still a long time because it is constrained duration of lift bridges, for technical (evacuation) we do not get," said Jasa Marga Officer, Dawn when contacted updetails.com, Sunday (15/5) night.

Dawn explained that due to the forced evacuation was decided two lanes closed for a while. "Yes for the safety of road users," said Dawn.

As a result of the closure, Dawn road users are advised to seek an alternative path. Therefore, it is feared other parts of the bridge also collapsed due to these events.

"The direction the reverse is also advised to use alternative roads for fear of another bridge would collapse," he said.