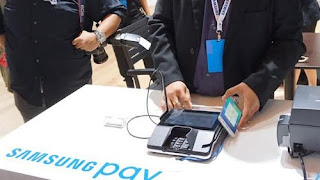 Samsung Electronic referred to already signed the cooperation agreement with Alibaba. Two big companies from China and South Korea are working together in terms of online payment.

That is, users of Samsung mobile phones will be easier when making payment using Alipay account. The move is expected to boost sales in the world's largest smartphone market - China.

In addition, Samsung Pay users will also have the option to make a payment wear her Alipay account, without having to access the account separately. Own Alipay currently has 450 million active users.

This step taken by Samsung after they launched Samsung Pay in China last March, or a month after Apple launched Apple Pay in the Bamboo Curtain country, as quoted by Reuters on Monday (23/05/2016).

But in the country, Alipay position was already too strong to rivaled by the same kind of services a new entry. It seems like this is what makes Samsung took Alipay to operate in China.
Ali PayAlibabaApple PayBamboo Curtain CountryChinaCooperation AgreementMobile PhonesNewsPaySamsungSmartphone MarketSouth KoreaTechnology
Comments