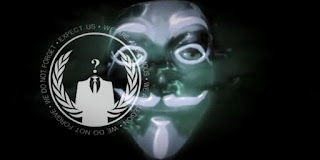 In this May, the hacker group Anonymous giant began operations hacker attacks that target international banks. In total, up to now there are nine large banks are victims.

Bank hacking operation was given the name 'OpIcarus' and is scheduled to last for one month. Anonymous party itself claims when OpIcarus operation will be one of the biggest attacks in history.

Anonymous DDoS attacks that flood a network-based bank's website using targeted traffic from other sources, makes it 'down'. According Techworm, the first victim of OpIcarus is the central bank of Greece.

The Bank Greece expressed indeed it be a victim, but the attack only lasted for a few minutes before finally halted by the bank's security system. The banking system is safe, but the attack has forced the bank's website Greece down in a long time.

Through their videos uploaded on YouTube, Anonymous claimed when their victims are still many, such as MasterCard, Visa, IMF, London Stock Exchange, and other central banks of various countries. Anonymous stressed that they will not be defeated by politics 'dirty' from the bank.

"This is just the beginning, we will not stop until all eyes were on the bank, as well as all institutions to save money from their criminal acts in it," said Anonymous.