The birth rate dropped, Italy give bonus money for newborns -->

The birth rate dropped, Italy give bonus money for newborns 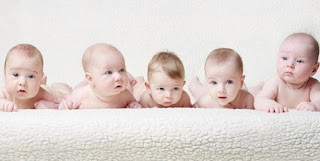 Italian health minister plans to provide a double bonus to any couple who is able to give birth to more children. It is intended to increase the birth rate continues to decline.

"If the trend of declining birth rate continues and we fail to overcome it, then later the birth rate will be less than 350 thousand per year within 10 years. It dropped 40 percent compared to 2010, it's a disaster," said Minister of Health Beatrice Lorenzin in the interview published on the newspaper La Repubblica, quoted by Channel NewsAsia, Sunday (15/5).

With plans to double bonuses, previously 80 euros per month, equivalent to IDR 1.2 million for the middle class to the top, hopefully they can push the number of births and into the larger family again.

This double benefit plans will be applied to babies born between January 1 to December 31, 2017, and allowed up to a third of births. Double allowance are not intended for the upper classes. Those with a tax value of more than 25 thousand euros per year can not receive double benefits.
BirthInterview PublishedItaliaLa RepubblicaMinister of HealthNewbornsNewsNewsAsiaNewspaperPlanTips
Comments