A new species of Giant Centipede is found, can swim and toxic -->

A new species of Giant Centipede is found, can swim and toxic 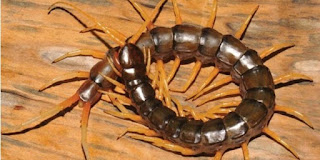 In 2001, scientists Natural History Museum, George Beccaloni, discovered a species of centipede in Thailand. Centipede species is unique because it was found in the waterfall area, and choose to run to the bank of the river to swim when she was found, instead of running into the woods like the other centipedes.

Once captured, this centipede then become mere collection until many years later recalled scientists are still unsure about the centipede swimming ability. But all of this was missed in 2016.

Some time ago, other scientists discovered two new species of giant centipede same Beccaloni findings. S. calcarata in Laos. The average length of this centipede as adults about 20 centimeters!

The results of DNA research also proved when the giant centipede is a new species, and eventually was named Scolopendra calcarata.

S. calcarata turned out to actually be able to swim in the water, and is expected to spread in Southeast Asia, including Indonesia, of course. The good news, though centipede S. calcarata own poison, but the poison will not kill humans. But still cause severe pain scientists said.

Next time we need to be more careful when playing in the waterfall area.
DNAGiant CentipedeMuseumNewsScientistSpecies
Comments