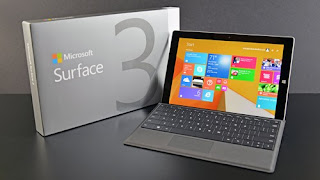 After approximately one year on the market the gadget world, it was time for Surface 3 for retirement. Microsoft's tablet was reported to be discontinued by December 3, 2016.

"Since the Surface 3 released, we saw strong demand and satisfaction of our consumers. And until the end of December 2016 we no longer manufacture Surface 3," said Microsoft spokesman quoted by Tech Times, Wednesday (06/29/2016) ,

Along with the announcement stop schedule production time, Microsoft also announced that the current supply of the device is running low. Not only Surface 3, but also wearable Band 2 at some stores in the United States.

Although said ends, Microsoft has not revealed any device that will be used as the successor of Surface 3. However, according to a recent report Redmond-based company, the United States was reportedly preparing tablets 2-in-1 with latest OS Windows 10.

Surface 3 was first introduced in March 2015 ago. Tablet with 10.8 inch landscape display (1920 x 1280 pixels) is equipped with a kitchen runway in the form of a quad-core processor Intel Atom x7-Z8700, RAM 4 GB of storage capacity of 128 GB / 2 GB storage capacity of 64 GB, and runs on any operating system Windows 8.1.
GadgetMicrosoftNewsSurface 3TabletWindows 10
Comments