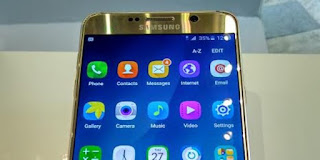 Coming to the end of the month of June 2016, Eldar Murtazin, the famous Russian blogger diligent in providing accurate leaks about the new smartphone unveil seconds of launching the Samsung Galaxy Note 7.

Murtazin make sure if Samsung will introduce the Galaxy Note 7 to the public on August 2, 2016. In addition, Murtazin also provide a bit of disappointing news which is embedded in the battery was only 3600mAh phablet.

Based on other rumors that have circulated previously, Galaxy Note 7 comes in two variants. The first variant carries the usual flat screen, while another variant comes with two screens curved side is similar to Samsung's Galaxy S7 edge.

Further, the rumored Galaxy Note 7 6 comes with a 5.8-inch Quad HD screen and 6GB RAM. Bodi phablet is also designed to have curved sides in front and back, just like the Galaxy S7.

Galaxy Note 7 armed with 823 Snapdragon processor which is an upgraded version of the Snapdragon 820 in the Galaxy S7. Amazingly no internal memory 256GB in this flagship phablet.
BloggerGalaxy Note 7PhabletRussianSamsungSnapdragonTechnology
Comments