Watch out, like to see a smartphone while sleeping trigger blindness -->

Watch out, like to see a smartphone while sleeping trigger blindness 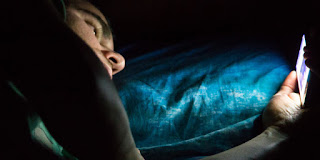 Are you fond of playing smartphone while sleeping? If so, you should stop this habit, because it can adversely affect the eyes.

Based on research uploaded in the New England Journal of Medicine, in case of temporary blindness monocular (one eye) due viewed smartphone while sleeping.

In this case, it was mentioned when there are two women aged 22 and 40 who complained of an eye they suddenly could not see for a few months. Once this blindness symptoms appear, can last up to 15 minutes before their sight restored.

At first the doctors thought this temporary blindness of the eye occurs because of a mild stroke caused by a blockage of blood vessels in the brain. However, after all the medical tests said two women had not been experiencing health problems.

All unanswered after doctors from Moorfield Eye Hospital in London, Gordon Plant, ask when the symptoms of blindness while it was happening. Not unexpectedly they both answered when blindness that appears when using a smartphone while lying with one eye sees smartphone, while the other eye closed pillows.

Activities like this forces the eye to adapt to bright screen smartphone, while the other eye is in a 'dark' or closed. Well, tom doctor finally categorize these symptoms as temporary blindness due to smartphones.

Fortunately, the doctors call if this blindness does not indicate a serious illness and can be avoided by looking smartphone with both eyes. Of course, it would be better if you do not use a smartphone too often when lying down.
BlindnessHealthSmartphoneSymptoms AppearTips
Comments