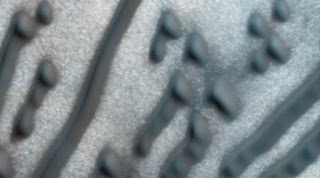 The picture was taken in February 2016 by using a high-resolution camera on the Mars Reconnaissance Orbiter United States Space Agency (NASA).

Whether the finding was deliberately left behind by the aliens Mars or just a topographic anomaly? To that question, NASA tried to explain it scientifically.

Quoted from CNN, Wednesday (07/13/2016), the sand dunes are formed in the lower berpermukaan thought to be an old asteroid crater.

According to the NASA, the region forming effect for the amount of sand hills and the wind pattern that forms the pile.

Unlike a line in the sand dunes that we usually see on Earth, winds that carve the mound was made to have dots and lines with different patterns - like a Morse code.

But until now, researchers have not been able to find the cause of why the 'Morse code' is formed in the region.

"That process is currently not well understood and became one of the motivations for studying in this area," NASA said in a media statement.

A planetary scientist, Veronica Bray, trying to translate the Morse code using the site Gizmodo.com and yielded the following results:

However, NASA did not think that the code was accidentally left behind by the aliens to convey a message to the inhabitants of Earth. What do you think?
AlienAstronomerCode on MarsEarthMarsMessageMorse CodeNASANews
Comments