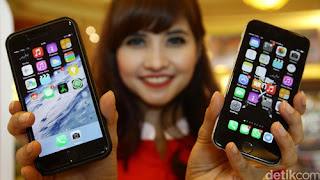 Apple stumble tax cases in the EU which makes the iPhone manufacturers are required to pay the tax debt of USD 14.5 billion to the Irish government. The order was issued by the European Commission which assesses Apple receives illegal aid from Ireland.

EU authorities stated, Apple and Ireland intentionally doing a deal that allows Apple to pay much lower taxes for more than a decade. Such agreements are considered illegal.

"The rules of tax breaks given by the Irish that lowering the tax burden Apple for more than two decades, is a violation of EU rules. Apple now have to repay these benefits," said Competition Commissioner of the European Union, Margrethe Vestager were quoted by Reuters on Wednesday (31 / 8/2016).

The European Commission states deal with Ireland makes Apple could pay very low taxes. Even just 0.005% in 2014. In fact, the corporate tax in Ireland the average is 12.5%.

"Members of the European Union can not provide a tax benefit on a particular company, it is illegal under EU rules," added Vestager.

The EU decision was met with anger from both Apple and Ireland. Ireland was not made a mistake. While the United States government was outraged in which the decision was rated could threaten the economic partnership between the US and Europe.

"The theory of the European Commission, any company in Ireland and across Europe suddenly at risk of being targeted tax under the rule of law which in fact never existed," said Apple CEO, Tim Cook.

Both Apple and the Ireland government said it would appeal against the decision of the European Commission. Demand payment of USD 14.5 billion is a record, as much as 40 times higher than previous similar cases.

Technology companies such as Apple are operating in Ireland for their intensive taxes. In neighboring countries the United Kingdom, Apple employs about 5,500 employees. The case is assessed to be a bad precedent for the Ireland.
AppleBussinessEuropean UnioniPhoneIrelandManufacturerNews
Comments