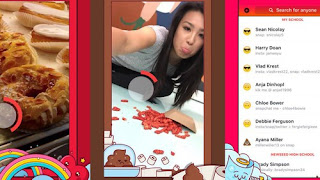 As Facebook itself, Lifestage also is social media. The difference is, Lifestage reserved only for teenagers up to the age of 21 years. The interface is arguably the contemporary, reflecting what he likes teenagers today.

Using Lifestage, teen users can simply post a photo or video like most social media. But what makes it interesting is, Lifestage can automatically display the friend who went to school with the user.

That way the user interaction can be carried out with his friends believed would be better.

Moreover instead of profile picture, Lifestage will ask the user to record their own video profile. So when a friend who wants to know the profile of the user, will be greeted with a kind of self-made video introductions.

Quoted from Digital Trends, Lifestage actually made by 19-year-old Michael Sayman. Facebook boss Mark Zuckerberg was interested in his findings and had asked her presentation at the event F8. Later, also known Sayman internship at Facebook.

However, currently only available on iOS Lifestage. Nevertheless, it seems only a matter of time before Lifestage also be present in Android.
FacebookiOSLifeStageMedsosNewsSocial MediaTechnologyTeenTrendYoung People
Comments