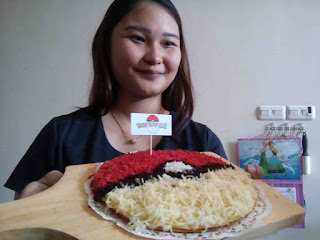 Bright moon cake named Poke Poke Bull was too flooded with orders. Through social media the pemesannya came together, even up overwhelmed.

Rhesa and Jessi during business cakes and food. His business is run at home with the help of two family members.

Since the beginning made Poke Poke Bull demand a lot of subscribers, especially students and students who are avid games Pokemon Go. Some claim booked for a birthday gift or simply to enjoy together.

"Most orders of students, there is to buy a boyfriend and a birthday present," said Jessi.

But limited manpower, they also limit only 50 pcs everyday. More than that, reservations will be served the next day. Moreover, Jessie itself is currently pregnant with her first child fetus.

Both use the services of online motorcycle to deliver every order. Only when Saturday and Sunday, a motorcycle taxi service online rather full, in addition to street Malang were lots of jams. When a normal day, the booking will be fulfilled within 2 hours to 3 hours after booking.

Jessie said, there is no special recipe for baking the Martabak "Moonlit Poke",  just that it is specifically featuring characters Pokemon. The size is 22 centimeters in diameter with four color variants namely red, pink, orange and yellow.

"One pcs sold at IDR 40 thousand plus postage for IDR 10 thousand per 10 kilometers," says Jessi.

Pipit Anggraeni, one of the buyers from Tumpang, Malang admitted curious about the moonlit Poke Poke Bull. Curiosity was relieved after the order arrived on board.

"Curious, wanted anyway there are other forms, like Pikachu or anything," he said.

Rhesa did not deny that his business boarded fame games Pokemon Go. He also realized that the fever of this game will be a limit. But he believes the food business and the cake is still very promising.

"Very promising, a season when the game Pokemon Go will run out, we are trying to upgrade. It's just momentum alone," he said.
feverFoodMalangMartabakMoonlit PokeNewsPokemon GoTerang Bulan
Comments

Hey what a brilliant post I have come across and believe me I have been searching out for this similar kind of post for past a week and hardly came across this. Thank you very much and will look for more postings from you. Pokemon Toys

A good blog always comes-up with new and exciting information and while reading I have feel that this blog is really have all those quality that qualify a blog to be a one. free pokemon go accounts

Great info! I recently came across your blog and have been reading along. I thought I would leave my first comment. I don’t know what to say except that I have. https://oomnex.com/product/oomnex-clioslim-body-sculpting-and-face-contouring-device

Rewriter On this page you can read my interests, write something special.

Can nicely write on similar topics! Welcome to here you'll find out how it should look. Rank

It was wondering if I could use this write-up on my other website, I will link it back to your website though.Great Thanks. play slope game

I have a hard time describing my thoughts on content, but I really felt I should here. Your article is really great. I like the way you wrote this information. 먹튀검증사이트

I havent any word to appreciate this post.....Really i am impressed from this post....the person who create this post it was a great human..thanks for shared this with us. 먹튀검증사이트

I wanted to thank you for this excellent read!! I definitely loved every little bit of it. I have you bookmarked your site to check out the new stuff you post. 먹튀검증업체

Its as if you had a great grasp on the subject matter, but you forgot to include your readers. Perhaps you should think about this from more than one angle. Pokemon Unite Guide

I got what you mean , thanks for posting .Woh I am happy to find this website through google. rumormillnews

Nice post. I understand some thing very complicated on different blogs everyday. It will always be stimulating to learn content from other writers and exercise a little at their store. ufabet1688

It is included in my habit that I often visit blogs in my free time, so after landing on your blog. I have thoroughly impressed with it and decided to take out some precious time to visit it again and again. Thanks. unblocked 76 games

There you can download for free, see the first of these data. 먹튀

An obligation of appreciation is all together for the informational and pleasing post, plainly in your blog everything is extraordinary. ufabet

So it is interesting and very good written and see what they think about other people. run 3 unblocked games

most excited Because the content is very good, understand quickly สล็อตออนไลน์

Hi! This is my first visit to your blog! We are a team of volunteers and new initiatives in the same niche. Blog gave us useful information to work. You have done an amazing job! 메이저토토사이트 Thank you very much. Can I refer to your post on my website? Your post touched me a lot and helped me a lot. If you have any questions, please visit my site and read what kind of posts I am posting. I am sure it will be interesting.