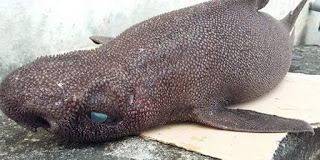 "The specimens will be analyzed thoroughly by the research team along with other researchers FPIK of Unsrat Manado, outside Unsrat even abroad. However, the research authority directly under Unsrat Manado," said Dr. Gustaf Mamangkey, S.Pi, MSc, one of the coordinator of the team at a press conference in the building FPIK, Wednesday (10/8).

As from today, officially opened analytical work indefinitely and open for research by others, but under the authority of Unsrat team that has been formed. This team consists of academics such as Prof. Janny Unsrat D. Sills, Prof Farnis B. Doll, Prof Winda Mingkid and other members.

Each one of them has a background expertise in Ikhtiologi, Taxonomy Morphology, Genetics, Physiology and Bio-Marine Ecology that will be researched more fish like shark findings Jeffry Aiptu Nggala while playing with his son on the beach Kalasey, Minahasa, on Sunday (7/8 ) then. The beach is in front of the house Jeffry entered the territorial waters of the Bay of Manado.

The specimen was then submitted to the research team on the next day, Monday (8/8), witnessed DKP staff in North Sulawesi and Tim Compass. When submitted, some parts of the skin specimen was peeling and part of her anus had to remove dirt and oil where groups of sharks usually contain lots of oil on the heart.

Once received, the specimens were then taken to the Faculty of Marine Sciences Unsrat Manado and stored in the cooler by shards of ice and sprinkled with salt.
Aiptu Jeffry NggalaFishFrigManadoNewsPirates EuropeansSam RatulangiSpecimenUniversitas Sam RatulangiUniversity
Comments