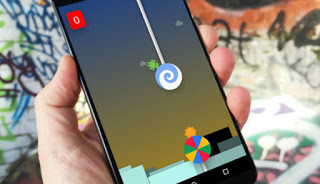 You certainly know the game is simple and addictive Flappy Bird. A very simple game is made in just a few hours, by the author, who was saturated.

But who would have thought, if saturation is successfully made it to become a millionaire, from ads generated by the game. But this time, there are many similar games, which can become addictive for players.

Typically, these games will be posted and published at game stores, such as Google Play for Android users. But if you're using Android, it turns out there are games that were purposely hidden by Google, which can be addictive.

How to unlock and play this game also made very hidden, so do not be surprised if many Android users who do not know, maybe including yours instead.

This game is devoted to those who use the latest version of Android, namely Lollipop. How open are as follows:

Step 1
Go to the menu settings or 'set' and discover the 'About Phone' and press.

Step 3
Then the screen will appear colored with a circle inscribed with Lollipop.

Step 4
The logo Press five times, then hold it for two seconds and you can play games.

Step 5
Play the game and make sure it is not about the Android logo lollipop. And determine your score.