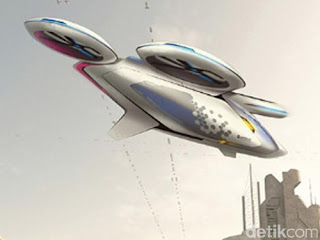 Toulouse - Airbus has plans to have a flying car. The flying car was developed in order to combat traffic congestion in the world of increasing urbanization in major cities.

"Expert technology in Silicon Valley created a high-tech product every day. However, they still do not have a solution for one of the biggest problems (congestion) at peak hours. In response, an expert in the Airbus Group to develop a radical concept that would utilize air space for reduce urban congestion, "wrote Airbus on its website on Thursday (08/25/2016).

Aircraft manufacturers say they have an expert in the development of autonomous flying vehicles.

According to the Project Executive, Rodin Lyasoff said Airbus hopes to test the car first flight by the end of 2017. According to him, many of the technologies needed, such as batteries, electric motors and avionics (electronic equipment flight).

"(Technology sense-and-avoid) is one of the major challenges that we are targeting to finish as early as possible," he said.

Lyasoff confident that this system will be suitable for cab models fly. "We believe that the global demand for this aircraft category can support the fleet of millions of vehicles around the world," he said.

"I'm not a fan of Star Wars, but it is interesting to imagine that one day the great city we would have flying cars. In a time not too long, we could use a smart phone to call a taxi to fly autonomous landing outside our front door, without pilot , "he said.
AirbusCarCustom CarFlyingNewsTechnology
Comments