How much ice on the Antarctic continent? -->

How much ice on the Antarctic continent? 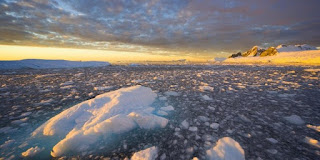 Antarctica known as icy and coldest continent in the world with the lowest temperature of minus 89.2 degrees Celsius in 1983. Have you ever wondered how much ice on Earth's southernmost continent?

Many scientists stated when 90 percent of the ice on Earth can be found in the Antarctic. The majority of land in Antarctica is covered by ice with a thickness of more than 1.6 kilometers. According to research British Antarctic Survey (BAS) using NASA satellite Landsat 8, only 0.18 percent of land ice in Antarctica that is not covered with ice.

Based on data from NSIDC (National Snow and Ice Data Center), Antarctic ice around cover an area of ​​14 million square kilometers. Antarctic ice extent coincides with the United States and Mexico to join.

Interestingly, in the midst of this global warming, the Antarctic ice sheet just continues to grow (at least until recently). From 2003 to 2008, each year there are 82 billion tons of newly formed. In total, the weight of ice in Antarctica is estimated to 16 billion tons!

A very large number of scientists believe it makes when the sea level will grow up to 60 meters high when all the ice in Antarctica is melting.
AntarcticBritish Antarctic SurveyContinentIceNews
Comments