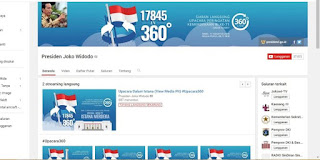 Flag ceremony commemorating the independence of Indonesia to 71 at the State Palace, also broadcast live streaming from YouTube account President Joko Widodo. In the video presents a whole series of activities in the flag ceremony video format 360 degrees.

Based on the observation Updetails.com video, it only presents a live stream when the flag raising ceremony, but there were some live video streaming such as Carnival and Carnival Palace Monas. Google Indonesia as the manager of YouTube also supports this move.

We are pleased to inform you that the flag ceremony is available in 360-degree video. It is currently eager for us, therefore it is the first time you can watch live streaming a flag ceremony in the video 360 degrees, wrote that notification.

You can see more at this link: