Is it true that Western countries mastermind behind the coup Turkey? -->

Is it true that Western countries mastermind behind the coup Turkey? 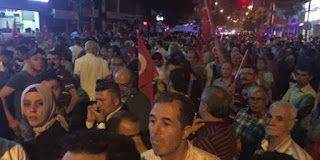 Erdogan supporters took to the streets against the coup.

Turkish President Recep Tayyip Erdogan accused Western countries of supporting terrorism and cooperate with the perpetrators of the coup.

The accusation that he gave two days ago in a speech in Ankara. Erdogan said on July 15 coup scenario was designed abroad.

"This coup attempt carried out by people in Turkey but the scenario is designed on the outside. Unfortunately, Western countries of supporting terrorism and in favor of the perpetrators of the coup," he said to applause the audience, as reported by the television station CNBC on Wednesday (3/8 ).

He also criticized Western countries that do not show solidarity with Ankara after the military coups.

Erdogan comparing France and Belgium attended many EU leaders a few days after an incident a terrorist attack. While Ankara did not get a similar visit from allied nations. "Those countries and all the time we consider a friend," said Erdogan.

Former Chief of Army Intelligence Agency of Turkey, Ismail Hakki Pekin, including who believes the US interference in the movement of soldiers who sympathized with the political agenda of the charismatic cleric Fethullah Gulen.

Pekin declare Turkey an attempted coup not sanctioned fully by President Barack Obama. He suspected treason trial the other day just masterminded by Gulen who tried to marry democracy and Islamism, supported by some official Washington D.C.

"The ultimate goal is not a coup ousted President Erdogan, not just that. The pursued is forcing Turkey to conduct foreign policy in accordance wish the United States," said Pekin as reported by the Daily Sabah, on Monday (1/8).

Erdogan has asked President Obama to extradite Gulen but Washington said it would grant the request that if there is evidence of involvement in a coup last month Gulen.
CoupErdoganGulenGulenistNewsObamaTurkey
Comments