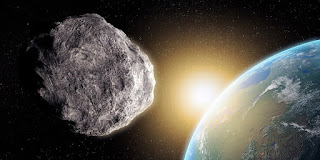 Somewhere out there, there may be thousands of asteroids that are harmful to the Earth's claims are not true though. However, unlike the case with a 500-meter asteroid named 'Bennu'.

According to scientists from the University of Arizona, New Bennu asteroid will approach the Earth in the year 2135. At that time Bennu is expected to pass between the Earth and the Moon. Scientists fear it is not in the year 2135, but many years afterwards.

Keep in mind when passing asteroid Bennu orbit (trajectory around the sun) Earth every six years. Bennu rare occurrence passage between the Earth and the Moon in the year 2135 it was called Bennu could deflect the trajectory becomes earthbound in the future.

Dante Lauretta, a professor from the University of Arizona, said that if 40 years after the passage of Bennu between the Earth and the Moon, Bennu likely hit the Earth.

"The approach of Bennu in the year 2135 will change its trajectory, potentially pointing to Earth at the end of the century (2135). Bennu could be doomed to suffering and death is great," said Lauretta in the Sunday Times.

Lauretta then estimate the chances Bennu Bennu hit Earth about 1: 2700 in between the years 2175 and 2196. If a collision does occur, will appear the explosion equivalent to 3 billion tons of bombs.

Based on this case was, or the US space agency NASA, trying to send a spacecraft to examine Bennu. Air-Rex named OSRIS is planned to be launched in September and is scheduled to land at the Bennu 2018.
BennuEarthGiant AsteroidNewsSkyTechnology
Comments