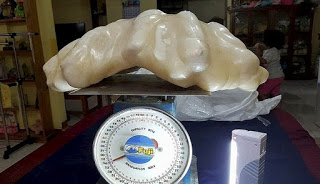 Largest pearl in the world. Photo

Pearls are one of the ingredients to beautify your jewelry, both made of gold or silver. The price of a pearl is different, there are cheap but there is also very expensive.

But usually, the size of the pearl very big influence on the selling price. Pearl itself is produced by sea creatures are mussels, and they take up many years to create a perfect pearl.

Usually pearls produced only the size of marbles. But the pearl of this one, will make you wonder. How not, the estimated price is so fantastic that IDR 1.3 trillion. From which the pearl is coming from? This giant pearl could be the largest ever found in the world, and five times larger than the previous record ever recorded.

A fisherman who has not been identified, found the pearl weighing 34 kilograms about ten years ago off the coast of Palawan Island, Philippines. He did not know and would never have expected, if the value of the pearls around US $ 100 million or Rp1.3 trillion. And unique, this fishing store this pearl as a 'lucky charm' in his shanty made of wood. Early reveal the owner of this pearl was when he was forced to move house. And fishermen leave it up to local tourism officials, and they were stunned at the sight of this giant pearl.

Meanwhile the biggest pearl world today, weighs 6.4 kilograms and is worth US $ 35 million or one-third of the pearl fishermen. "We were amazed when he brought it to us. We now need the help of gemologists to certify (pearls) that. We are waiting for the authentication of the Gemologist Institute and other international authorities," said Cynthia Aileen Amurao tourism officials quoted by the Mail Online. Pearl is now shown to the public, and is expected to be a magnet to bring in more tourists.
FishermenJewelryLargeNewsPearl
Comments