MIT battery hp success for the future, ready to appear in 2017! 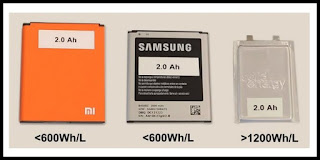 Almost all smartphones and cell phone batteries available today Lithium-ion. The battery of this type is considered the most secure, large power, and fast charge it. But this has changed thanks to the invention of scientists Massachussets Institte of Technology (MIT).

According to MIT News, scientists are incorporated in SolidEnergy successfully developed a new kind of battery called lithium-metal. These batteries can store double the energy in the same size with a Lithium-ion battery.

According to the plan, the team will market SolidEnergy Lithium-metal batteries for smartphones and electronic market in 2017. Ultimately, in 2018, this new battery technology is expected to replace the current car battery.

Since a few years ago, scientists did try to develop Lithium-metal batteries. However, this is difficult to do because of this kind of battery prone to heat and explode. As a solution, the team SolidEnergy make wrapping layer and a liquid electrolyte that can make the battery remains 'cool'.
BatteryCoolIonLarge PowerLithium MetalMITSolidEnergyTechnology
Comments