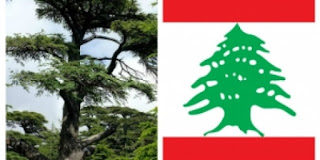 Speaking of Lebanon, certainly reminiscent of the existence of a unique cedar tree. Lebanon Cedar or Cedrus type Libani even considered as one of the trees that have magical powers in the world.

They grow exclusively in Mount Lebanon, which runs along the mountain region of the country. These trees are also depicted on the state flag as a symbol of national pride.

Cedar of Lebanon a distinctive icon as old-old tree, the branch level who are old enough to form dense crowns flat.

Cedar bark dark greyish but the wood can bring beautiful light. As well as textured hard and very resistant to decay process.

Sap issued a sweet scent, and although their positions are exposed to lots of sunlight, these trees are always green lush and fragrant. People to say that God himself planted this tree.

In the mythology of ancient Mesopotamia, the Mount Lebanon region is regarded as the god who guarded by Humbaba. In the epic tale of Gilgamesh 4,000 years ago, one of the great works of literature, we are told that Gilgamesh defeated Humbaba.

He entered the virgin forest and cut cedar trees to build a wall around the city of Uruk. Then exploits the story of Gilgamesh finally prove that the cedars of Lebanon has been known since historical times.

The tree also known as Aras tree plays a very important role in creating a Lebanese name. Moreover, having proved that the logs produced are the most valuable construction materials and antiques.

People Phoenicians utilizing cedar to build ships they used to sail to the Mediterranean. While the Egyptians used cedar for the mummification process, and Jews wear cedar bark for circumcision and treatment of leprosy. Meanwhile, Ottoman society wearing cedar wood as fuel for train engine because of the wood can be burned much better than traditional oak wood.