Not only food, 4 this weird stuff was never sold KFC -->

Not only food, 4 this weird stuff was never sold KFC 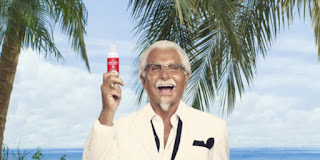 Kentucky Fried Chicken or KFC is famous for fried chicken with 11 secret ingredients are formulated by Colonel Harland Sanders. But it was not just the fried chicken that became merchandise KFC. Fast food restaurants have turned out had launched beauty products with the aroma of fried chicken. What strange product ever launched by KFC? Here are some of them.

It is a product that was launched KFC Hong Kong. Not a variation of fried chicken or chicken burger, but the nail polish. Uniquely, the nail color is actually edible.

Reported Global News (8/5), the nail color was developed by Ogilvy and Mather as part of an advertising campaign for KFC, made from natural ingredients and no preservatives.

This is the latest non-food products launched by KFC, namely sunscreen or sunblock. According to KFC claims as reported by The Huffington Post, they have created a sunscreen flavorful fried chicken that is exclusive and very limited.

Sunscreen in this bottle would smelled KFC fried chicken when massaged into the body. However, this product is not to be eaten.

KFC China launched the burger look cute with the name Rose Cheese Roasted Chicken Burger. It consists of bread pastel pink, the color of rose petals. Equipped with black sesame spread across the surface of the bread and chicken fillet wrapped in ketchup.

According to Kotaku, pink burger possibility of accidentally launched following the Japanese anime Puella Magi Madoka Magica that are loved by children and adolescents China.

Making candles is initiated by Kathy Werking, one of the best candle maker in Kentucky. He has worked hard to create the perfect scent to represent Kentucky Experience. KFC itself is actually not cooperate with Werking in the manufacture of products.
Colonel Harland SandersFoodFried ChickenKentuckyKFC
Comments