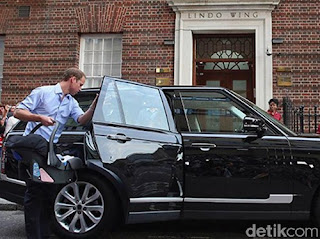 London -Range Rover Vogue SE were used by Prince William and his wife Kate Middleton is currently being auctioned by Charity Stars.

Range Rover was first used in three years ago to deliver their first child, Prince George from hospital to home.

When the news was revealed the highest bid is at position 66020 pounds of 10 bidders. There remained a few more days before it closed on September 16.

This car is special because speknya specifically to protect the royal family. So do not be surprised if the Range Rover is equipped with a couple who used the most current spec and has features specially ordered.

Power generated this Range Rover is 334 hp with a 4.4 L V8 engine with 8-speed transmission.

All donations obtained from this auction will get Sun Screen IT, which will be used to donate to schools, hospitals, orphanages in developing countries as well as the Stand Down is a charity that offers mental counseling to the armed forces
CarGeorgeKate MiddletonNewsPrince WilliamRange Rover
Comments