Scary facts behind the appearance of a blue lake in Antarctica -->

Scary facts behind the appearance of a blue lake in Antarctica 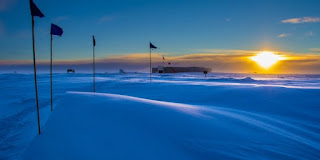 By the scientists, this beautiful blue lake called Lake superglasial. Although it is very interesting to be seen (and photographed), the emergence of the lake is causing fear among scientists. 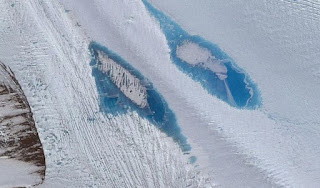 Superglasial lake in Antarctica in 2016 DigitalGlobe

The reason, the emergence of the lake superglasial claimed to be the more severe signs of global warming in the Antarctic. During the years 2000-2013, there were 8,000 reported sprung superglasial lake in eastern Antarctica.

Yes, it looks blue lake is none other than melting permafrost. The lake is predicted to weaken the structure of the ice sheets in the Antarctic, making it easily destroyed. In fact, the phenomenon of the lake superglasial declared as one of the main causes of the loss of ice in the North Pole or the Arctic.

Based on data from NSIDC (National Snow and Ice Data Center), now around the Antarctic ice covering an area of ​​14 million square kilometers. Antarctic ice extent coincides with the United States and Mexico to join. And the emergence of the lake superglasial be a serious problem for the Antarctic.

Naturally enough, because a very large number of scientists in Antarctica to make sure if the sea level will grow as high as 60 meters if the whole ice there is melting.