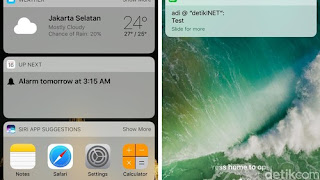 During this time the Android operating system is considered less secure than Apple iOS because it has vulnerabilities in security. In fact, iOS also keeps the security vulnerabilities that are just as dangerous.

Is a team of scientists from the Department of Computer Science at North Carolina State University who discovered it. They found that there is a vulnerability that could lead to attacks on the iPhone and iPad.

Initially they just want to see is there any potential security issues in iOS. So far, many more researchers explore the issues of security of Android.

As for the focus they are sandbox that serves as an interface between applications and iOS. This sandbox using a set of profiles for each third-party applications.

This profile controls the information that the application has access and where the action is set to execute the application. To see if it contained sandbox vulnerability that could be exploited by third-party applications, the researchers extracted the binary code compilation of profiles sandbox.

They then broke the code to be read. Then they use the code that has been broken down to make a model profiles and automatically run a series of tests that identify potential vulnerabilities.

The team then discovered vulnerabilities that allow them to launch various types of attacks through third-party applications. The attacks include the method of passing the privacy settings on iOS contacts, learn the location of the user's search history and obtain sensitive information such as accessing the file system metadata.

Besides the attack also includes methods to obtain a user name, a media library and storage space consumption that can not be restored.

Reporting from News18, Tuesday (08/30/2016), these vulnerabilities have been reported to a team of computer scientists North Carolina State University to Apple. Technology giant based in Cupertino, California, United States of America was immediately take corrective action.

"We have discussed this vulnerability with Apple. They went to work to fix this security vulnerability. Apple was cleaning applications that are likely to take advantage of this vulnerability," said William Enck, an Associate Professor of Computer Science North Carolina State University.
AndroidAppleApplicationCrackInformationiOSNewsPotential Security IssuesScientistTechnology
Comments