Scientists Found the Darkest Galaxies in the Universe -->

Scientists Found the Darkest Galaxies in the Universe 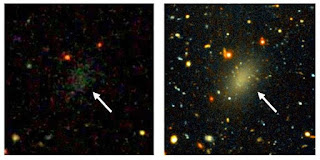 Gemini Telescope in Hawaii is the telescope with the best ability in the possession of mankind today. And recently, over 8 meters telescope was successfully used to locate the darkest galaxies in the universe.

Galaxies that scientists have named 'Dragonfly44' that is located near the constellation Coma or about 30 light-years from Earth. To find Dragonfly44, scientists made observations during 6 days.

At first they were curious because Dragonfly44 very dim galaxies yet has a high speed. Ruination of a galaxy indicates when it is small, as a result of high speed was not supposed to. But it did not happen in Dragonfly44.

Dragonfly44 predicted to have a mass of about 1 trillion sun, which is actually not much different from the mass of the Milky Way. What distinguishes our galaxy, Dragonfly44 99.99 percent consists of dark particles are not stars or planets. For those of you who are unfamiliar, dark particles are not visible matter in the universe that has the force of gravity and keep the objects in outer space remains in place.

"We do not know how galaxies like Dragonfly44 can be formed," said Roberto Abraham, scientists from the University of Toronto as the co-author of the study.

Dragonfly44 own galaxy discovery is expected to help scientists understand the dark particles or 'dark matter'. Indeed, despite being able to define the dark particles, much remains unknown about the scientist's largest constituent material universe.