The boss of Facebook Give Drone Internet at Pope Francis -->

The boss of Facebook Give Drone Internet at Pope Francis 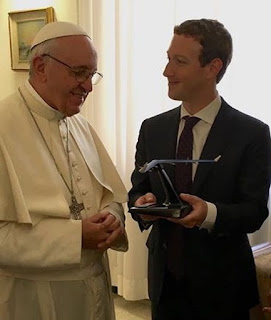 During his visit to the Vatican, Italy, Facebook CEO Mark Zuckerberg and his wife Priscilla Chan was impressed when he met Pope Francis.

"This is a meeting that will never forget. Anyone who met him will feel the warmth and kindness of his heart, he was very concerned about how to help people," said Zuck, as quoted from his Facebook account, Tuesday (30/08/2016).

Zuck displaying photos when he gives Aquila to Pope Francis. Aquila is solar powered drones that will help expand Internet access to remote.

"They talk about how to use communications technology to reduce poverty, encourage the mixing of cultures and convey the messages that motivate, especially for those suffering from disaster," the official statement the Vatican Press Office.

Zuck announced his trip to Italy last week, after knowing the country was rocked by an earthquake. He said that Italy is very special to him. This state is where Zuck and his wife spend a honeymoon. Additionally, Zuck also learn the history of classical and latin.

Agenda Zuck in Italy seems to be pretty solid. All activities are immortalized in photo shots are then posted on Facebook.

In addition to visiting Pope Francis and earthquake victims, Zuck also go to the Colosseum. Then he also showed off a photo while attending a wedding Spotify co-founder Daniel Ek held near Lake Como in northern Italy.
ActivitiesDrone InternetFacebookMark ZuckerbergPopePope FrancisTechnology
Comments