The Causes of Death most Important Human Ancestor 'Lucy' revealed! -->

The Causes of Death most Important Human Ancestor 'Lucy' revealed! 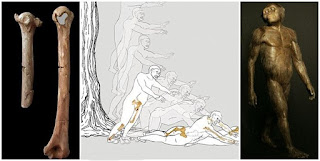 Lucy is the name given to the fossil bones of scientists species Australopithecus afarensis (the family of hominids or great apes) discovered in Ethiopia in 1974 ago. Lucy is also regarded as fossils of human ancestors found to be very important because as complete, about 40 percent.

But scientists are so curious about one thing on Lucy, namely, how these species die. The reason is obvious, Lucy including ape species walked on two legs alias bipedal. This species is a bridge between ape walking with arms and modern humans.

Based on the research John Kappelman, Professor of Anthropology at the University of Texas, Lucy died from falling out of trees about 3.18 million years ago. These results were obtained after Kappelman scanning X-rays of the fossil Lucy.

For 10 days, Kappelman and Geology professor named Richard Ketcham managed to photograph 35,000 X-ray photographs of the fossil Lucy. Well, from these pictures in mind when cracks are not reasonable in the right thigh bone Lucy.

After concentrating with Dr. Stephen Pearce of Austin Bone and Joint Clinic, revealing when the bone cracks like that can be formed when Lucy fell from a height of 12 meters at a speed of 56 kilometers per hour. As a result of the fall anyway, Lucy angkel fractures, knee, pelvis, and ribs.

Although it belonged to the great apes, Lucy relatively short compared to humans. In old age, Lucy has a height of 1.1 meters. While the weight of his body during life is estimated at around 29 kilograms. As a result, falling from a height of tens of meters directly makes it dead.

Furthermore, based on the characteristics of the species Australopithecus were found in Hadar, the size difference between male and female species are very clear. Australopithecus males usually have an adult body size is large enough, while the smaller females. Therefore, scientists have agreed to enter Lucy to the female group.
AnthropologyAustralopithecus AfarensisHominideHumanHuman AncestorLucyNewsSpeciesUniversity of TexasX-Ray
Comments